Bacteriophages, or “phages”, are the most numerous beneficial viral organisms on the planet. It is estimated that there are more phages in the environment than all other organisms combined.

Already, scientists, researchers and doctors have found success utilizing bacteriophages in a number of industries, including human health where they have helped patients to fight infections that have become resistant to common antibiotic treatments. Since then, bacteriophages have been introduced into agriculture, another space where chemical and antibiotic resistance issues are threatening the common practices that are used to help feed the growing world.

Bacteriophages may be gaining in use, but they are far from new technology. In fact, shortly after World War I, scientists in both Britain and France noticed that bacterial infections among wounded soldiers were the primary cause of amputations and death in the post-trauma clinical setting. These scientists discovered that wound cultures of the disease-causing bacteria that were exposed to air would occasionally have small “dead zones” where the bacteria wouldn’t grow. This led to the conclusion that a very tiny unseen virus-like particle was infecting the disease-causing bacterial cells resulting in their death.  These organisms were aptly named bacteriophages, the Latin derivation of bacteria-eaters. This promising “phage therapy” discovery quickly developed into treatments for many different bacterial ailments after scientists were able to successfully cure a man infected with dysentery.

However, the discovery of more shelf-stable antibiotic compounds such as penicillin quickly displaced this course of treatment and phage therapy was all but abandoned in the USA. Concurrently, continuing work in Eastern Bloc countries such as Georgia, Ukraine and Russia spawned a variety of bacteriophage products ranging from toothpaste to household cleaners.  To this day, Eastern European citizens incorporate multiple phage products into their daily lives.

Phages work in a way that is very similar to most viruses. They’re not “alive” in the traditional sense but exist in an inert state until they encounter a “host” bacterial organism. If the phage is compatible with that host, attachment occurs and the bacteriophage attacks the bacterial cell.  Once inside, the DNA incorporates into the bacterial genome and effectively hijacks the metabolic machinery of the cell forcing it to make new viral particles.  Those particles assemble into new bacteriophages and when the metabolic energy of the cell is spent, hundreds of new viral particles burst from the cell ready to infect new bacterial cells. This provides a multiplicative effect and phage numbers, or titers, will increase steadily over time as long as the target bacterial disease is present.

When phage therapy adoption was replaced by antibiotics in the USA, the use of antibiotics skyrocketed without much thought about resistance.  New compounds were discovered that could take the place of compounds that lost efficacy.  This was a huge boon to overall health in the West and has been a major factor in the rise of life expectancy in the 20th and into the 21st century. But, every silver-lining also has a cloud.

We see this same trend in the agricultural sphere where there is overexposure to a single compound, whether it’s a conventional chemistry or an antibiotic compound such as Streptomycin.  As a result, evidence exists in both human health and in agriculture where continued overuse and over-exposure of products has resulted in disease causing bacteria to adapt to overcome the control mechanisms. Bacteriophages, based on their development, offer a greater ability to adapt to changes in the host bacteria.

Currently, multiple bacteriophage products exist on the market for use in commercial agriculture.  A phage solution for tomato spot and tomato speck along with pepper spot was approved for use on tomato and pepper crops by the EPA in 2005. Since that time, the EPA has approved additional agricultural phage products for control of tomato canker (Clavibacter michiganensis pv. michiganensis) as well as citrus canker (Xanthomonas axonopodis pv. citri) and for Fire Blight (Erwinia amylovora).

Certain precautions must be taken in the tank-mixing process to avoid inactivating the bacteriophages by combining them with a select incompatible chemicals, but the majority of IPM products on the market are tank-mix compatible.

The future of agricultural bacteriophage therapy continues to brighten as researchers, growers and organizations from all over the world come to see this technology as a viable and exciting tool harnessed from nature.

Using this innovative new technology, work continues to identify a fit to control many other bacterial diseases that are difficult to control effectively with traditional chemicals, including Almond Blast, Cherry Canker and Walnut Blight.

In addition, the possibility of broader uses as a food safety product that could be applied pre-harvest on crops for control of E. coli and Salmonella, as an equipment sanitization measure, or even as a water treatment could be a key solution and beneficial to growers.

Antibiotic resistance continues to be a significant concern for many growers, requiring the constant evolution of IPM programs and the rotation of different disease control strategies. Bacteriophages are proving to be an important strategic defense tool with growing importance and positive impact in agriculture today. 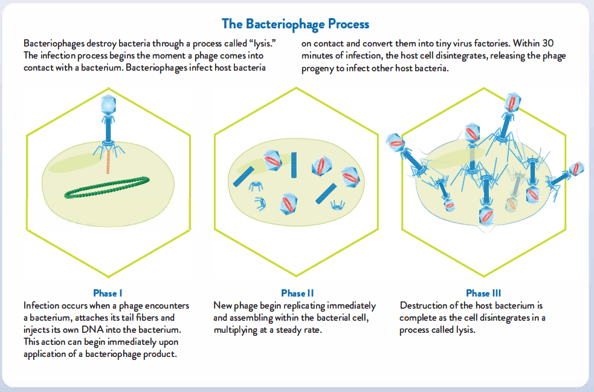 This article appeared in the February 2020 issue of CAPCA Adviser Magazine. You can read the original here.

There is only one Kocide
An introduction to Bacillus thuringiensis bioinsecticides
How can we help?