Copper and Mancozeb are among the most widely used bactericides and fungicides in agricultural production, providing growers with reliable control of a broad range of bacterial and fungal diseases across a wide array of crops. Both have long been a staple in Integrated Pest Management (IPM) to control bacterial and fungal diseases including powdery and downy mildew, bacteria blast, walnut blight, bacterial spot and speck to name a few. While these products are used standalone, they are also prominent tank mix partners that when combined, offers growers a broader spectrum of disease control and a resistance management tool whose effects provide enhanced performance and synergistic benefits.

Copper Use in Agriculture

The history of copper being used in agriculture dates back to the 1880’s, when a French scientist, Pierre-Marie Alexis Millardet, noticed that vines that came in contact with a copper sulfate pentahydrate and lime mixture were free of Downy mildew. While this first mixture known as the “Bordeaux mix” was the first widely used fungicide containing copper, more advanced copper products have since been a foundational tool in controlling a broad range of fungal and bacterial diseases across number of crops.

On the surface, all copper fungicides/bactericides work as protectants to plants. The crystalline copper particles adhere to the surface of the plant to provide a protective barrier. As the copper comes in contact with water, bioavailable Cu++ ions are released to protect against fungal and bacterial infections. Where commercially available coppers vary are the efficiency in which Cu++ ions are released, particle size, water solubility, formulation, and rainfastness to name a few key differences. Metallic Copper Equivalent (MCE) also varies across copper products; however, it should be noted that several technological advancements allow for the aforementioned variances to be more of an indicator to performance, as opposed to simply viewing products containing a higher MCE as better performing.

Fixed Coppers are the most widely used form of copper in crop protection, mainly because they are less phytotoxic to the plant. Examples of fixed coppers are: Copper hydroxide, Copper oxide, Copper sulfate basic, Copper oxychloride sulfate, Copper oxychloride and Copper octanoate. The most commonly used copper products are Copper hydroxides due to their high level of disease control and plant safety. Several technological advancements have occurred over the years within copper hydroxide products. These advancements allow for increased levels of bioavailable copper on a per pound basis and lower use rates per acre. These products have helped to maximize copper efficiency on the foliage of the plant, while lowering the environmental impact of copper yet providing outstanding disease control.

Mancozeb Use in Agriculture

Mancozeb is FRAC M:03 fungicide, which represents fungicides that have multi-site activity. It works as a protectant by disrupting core enzymatic processes within fungal cells, resulting in inhibiting spore germination within fungal pathogens on the plant surface. As a multi-site fungicide, Mancozeb has proven effective against a wide array of fungi, including ascomycetes, oomycetes, basidiomycetes, and deuteromycetes. Mancozeb is commonly used to control walnut blight, down mildew, and bacterial spot/speck, amongst a number of other diseases.

The Benefits of Using Copper and Mancozeb

Copper and Mancozeb have been mainstays in grower IPM programs and for good reason. For years they have provided reliable control of bacterial and fungal diseases; however, this extended use has resulted in growers seeing a reduction in control when used alone in some key diseases, such as Walnut blight. Combining Copper and Mancozeb has been shown to enhance control of walnut blight by helping to increase the penetration of cell membranes, which in turn helps the copper protect against bacterial diseases.

Additional benefits of using the combination of two active ingredients with multi-site modes of action helps to broaden the spectrum, reduce disease inoculum and incidence, and enhance resistance management. Growers have the option of buying individual copper and mancozeb products or purchasing a coordinated copper-mancozeb product.

Copper and Mancozeb are commonly used to control a number of diseases across a variety of crops, including: 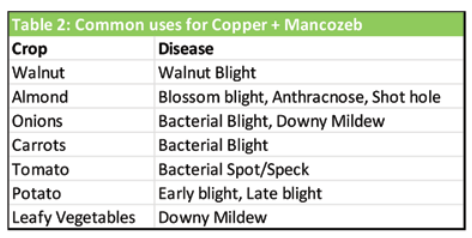 Growers are encountering new challenges daily in today’s dynamic agricultural environment; and, while new solutions are being introduced and offered, it’s good to know that they have a proven, trusted and reliable pairing ready to be incorporated into their IPM programs with Copper and Mancozeb.

This article appeared in the December 2020 issue of CAPCA Adviser Magazine. You can read the original here.

A woman’s place... in agriculture
An ounce of prevention...
Looking ahead...