Gemstar LC is an aqueous suspension concentrate insecticidal virus, registered for use on a broad range of crops. It contains a naturally occurring virus that infects and kills larvae of Heliothis and Helicoverpa species. Click here to download the Gemstar LC Technical Bulletin. 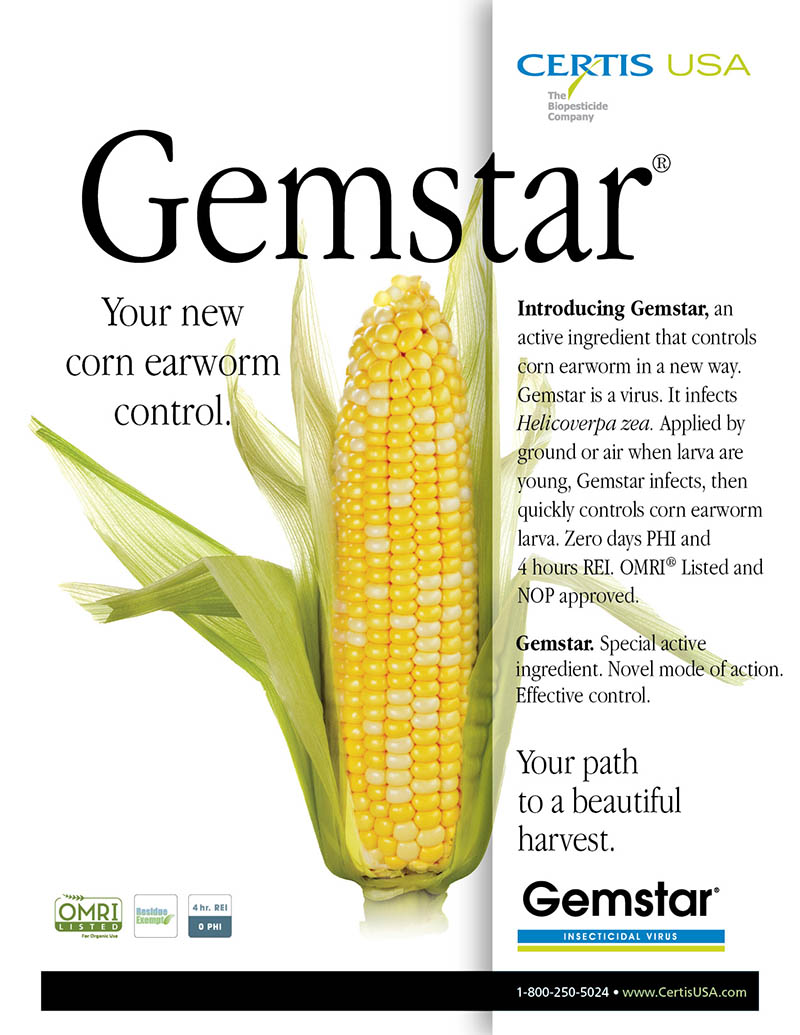 Gemstar LC is for use against the following pests:

Virus-killed caterpillar on a cotton leaf. Note how leakage of liquefied body contents releases new OBs that can be eaten by and infect other larvae (horizontal transmission).

Gemstar LC can be used with the following crops:

Notes:
Gemstar LC contains a naturally occurring virus that infects and kills larvae of the Helicoverpa or Heliothis spp. This virus is very host specific. It does not infect beneficial insects, fish, wildlife, livestock, or humans.

Gemstar LC must be eaten by the larvae to be effective so complete spray coverage is very important. Since Gemstar LC is most effective against small, newly hatched larvae, an early scouting program to determine early infestations is recommended.

Gemstar LC listed by both the Organic Materials Review Institute (OMRI) and the National Organic Program (NOP) for use in organic orchards.

Store at temperatures below 90° F. Activity may be impaired by storage above 90° F.

Storing this in a freezer or refrigerator will extend its shelf life.

This product is approved for organic production by the National Organic Program (NOP), a marketing program housed within the United States Department of Agriculture (USDA) Agricultural Marketing Service, the agency that sets marketing standards. The NOP mission is to develop and implement national standards that govern the marketing of agricultural products as organically produced, to facilitate commerce in fresh and processed food that is organically produced, and to assure consumers that such products meet consistent standards.

This product is OMRI Listed, therefore it is determined by the Organic Materials Review Institute (OMRI) to be suitable for use in certified organic production.

Neemix®4.5 is a botanical insect growth regulator (IGR) that controls a wide range of insect species. 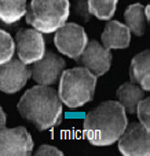 The scientific name for the active ingredient of Gemstar LC is Helicoverpa zea single capsid nucleopolyhedrovirus or HzSNPV. Multiple HzSNPV particles are naturally microencapsulated within a roughly spherical occlusion body (OB) that protects it to some degree from degradation.

Each OB measures about 1 to 2 microns in diameter; a single layer of more than a million Gemstar LC OBs could fit on the head of a pin.

A larva must ingest OBs in order to become infected with the virus. The highly alkaline environment of the larval digestive tract (where pH can be as high as 10) dissolves the OBs and releases the virus, which penetrates the cells lining the midgut.Once inside, the viral DNA “hijacks” the nucleus of the cell, causing it to replicate numerous copies of the virus which rapidly spread the infection to other organs. Within a few days the infected larva stops feeding, becoming pale and sluggish as its internal organs fill with virus. Upon death the larva “melts,” its fragile outer skin disintegrating to release the liquefied remains of its internal organs, containing billions of new virus OBs. Each of these is capable of initiation a new infection if ingested by another larva feeding at that site or wherever OBs have been deposited by raindrops, gravity, or by spraying Gemstar LC.

Laboratory studies have determined that a dose of only a few OBs is sufficient to initiate a lethal infection in newly-hatched larvae. A single ounce of Gemstar LC contains nearly 60 billion OBs. Of course, not every OB in a spray will be ingested by a larva, but the highly virulent nature of HzSNPV toward its host means that it is effective at very low use rates.

HzSNPV occurs naturally in Helicoverpa and Heliothis populations, but usually at levels too low to prevent damaging outbreaks in commercial agricultural crops. The virus can persist for years in protected environments such as soil and crop residue. Rainfall, wind, cultivation, movement of animals and birds, and other physical forces can move OBs onto areas such as foliage or fruit where they can be ingested by larvae to begin another cycle of infection. However, the most effective way to initiate infection is to spray the virus onto the crop in much higher amounts than would otherwise occur naturally.

Virus-killed caterpillar on a cotton leaf. Note how leakage of liquefied body contents releases new OBs that can be eaten by and infect other larvae (horizontal transmission).

Once virus infection has occurred within a larval generation, there are several ways it can be maintained within the target pest population. Horizontal transmission occurs when larvae become infected by ingesting virus released into the environment when diseased larvae die. Sometimes infection occurs too late and at too low a dose to kill a larva outright, even though the virus has entered the host cells. A female that survives this sublethal infection may transmit the virus to her offspring, a process known as vertical transmission.

Latent infection can also occur, in which the virus lies dormant in the host until stress brought on by overwintering, overcrowding, lack of food, or exposure to insecticides causes an outbreak of virus that kills the host. Latent virus can kill host insects months after the initial infection.

HzSNPV is highly specific to Heliothis and Helicoverpa larvae. It is not effective against other caterpillars, or against other orders of insect pests. It is noninfectious toward beneficial insects, fish, wildlife, livestock, or humans.

The label recommended application rate for Gemstar LC is 4 to 10 fl. oz. per acre. This equates roughly to 250 to 600 billion OBs per acre. Gemstar LC can be applied at the low label rate (4 fl. oz. per acre) if pest pressure is low, frequent applications are planned, or when mixing or rotating with another insecticide that will provide more rapid knock-down of larvae and / or adults. Multiple sprays at low rates and short intervals are likely to provide better control than a single spray at a high rate.

Gemstar LC applications should be targeted against first or second instar larvae. HzSNPV must replicate within the host larva in order to be effective, so Gemstar LC is slower to kill larvae compared to many chemical insecticides having a toxic mode of action. Smaller virus-infected larvae may still cause superficial damage, but they usually die before causing more serious damage. Higher doses of virus are required to kill larger larvae, which may do considerable damage to the crop before the infection advances sufficiently to stop them from feeding. Establishment of HzSNPV infection in the first generation may also carry over into later generations, making them easier to control with other tactics.

Compatibility With Other Pesticides

Some agricultural chemicals such as foliar fertilizers may cause high pH in the spray tank, which could inactivate Gemstar LC by premature dissolution of the viral OBs (similar to what occurs naturally in the gut of the target larva). In some areas, water used to mix sprays may itself be highly alkaline. Check the pH in the mix tank before adding Gemstar LC. If pH is 9 or higher, buffer to pH 7 to preserve bioactivity.

Do not mix Gemstar LC with any pesticide bearing a label that prohibits tank mixing with other products.

Use of Spray Adjuvants

Because of the way it is made, Gemstar LC contains natural compounds derived from host larvae that can provide some protection from the UV rays in sunlight. Additional protection, as well as enhanced spray deposition and rainfastness, may be obtained by using certain adjuvants with Gemstar LC. Pinolene or related stickers, latex, methylated seed oils, humic acid, and powdered skim milk have been used with some degree of success to enhance the performance of viral insecticides. Avoid mixing Gemstar LC with silicone-based adjuvants intended only as “spreaders.” Such compounds may interfere with the natural ability of the virus to stick to plant surfaces.

Refer to the adjuvant label or see your dealer for more information on a specific adjuvant.

Exposure to sunlight can be reduced and effectiveness of the virus may be increased by spraying Gemstar LC in the late afternoon or early evening. Avoid spraying in intense sunlight.

Gemstar LC meets National Organic Program (NOP) requirements and is listed by the Organic Materials Review Institute (OMRI) for use in organic production.

Performance of Gemstar LC may be improved by addition of a feeding stimulant such as sugar or molasses at a rate of 5 pounds per acre. Larvae will then ingest virus more quickly as they feed preferentially on spray droplets, reducing the time of exposure of the virus to sunlight and increasing the rate of infection. Molasses may also provide some protection from sunlight.

Gemstar LC can be stored at room temperature for up to two months without significant loss of bioactivity. Shelf life can be extended to one year by refrigeration. Gemstar LC can also be frozen for longer term storage (several years) if necessary.

Bioactivity of the virus can be reduced by prolonged exposure to temperatures above 90°F. Shortterm exposure (a few days) will not immediately deactivate the virus. However, always store Gemstar LC in its original bottle in a cool, dry place, out of direct sunlight. Shake well before use. 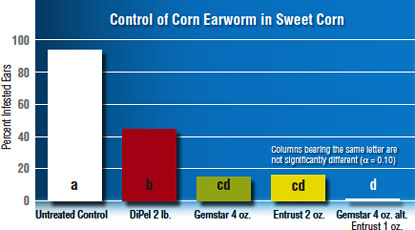 All rates in pounds of product per acre, applied via overhead sprinkler chemigation in 0.1" of water. Single treatments were applied 5 times, every 5 days. Alternating Gemstar LC and Entrust every 6 days (with 12 days between each of 4 applications of the same product) resulted in 99% reduction in infested ears compared to the untreated check. Trial conducted in 2008 in the Mid-Columbia Basin of Washington.

All rates are in pounds of product per acre. Six weekly applications via CO2 backpack sprayer in 60 gallons of water per acre. Gemstar LC treatment included 5 ounces of powdered milk as UV screen. Trial conducted in 1994 in North Carolina.

All rates are in pounds of product per acre. Five weekly applications via CO2 backpack sprayer in 7.3 gallons of water per acre. Trial conducted in 1994 in Nueces County, Texas.