Lettuce drop is one of the most frequent and destructive diseases encountered by commercial lettuce growers throughout the US. The causal agents Sclerotinia minor & S. sclerotiorum produce sclerotia requiring long rotations and annual fumigation in fields where the disease has become established. Heavily infested fields have incurred losses of up to 70%.

SoilGard® 12G Microbial Fungicide contains spores of Gliocladium virens strain GL-21 which has proven to be an effective fungicide in laboratory and field studies. Fungicidal activity occurs via four distinct modes of activity: 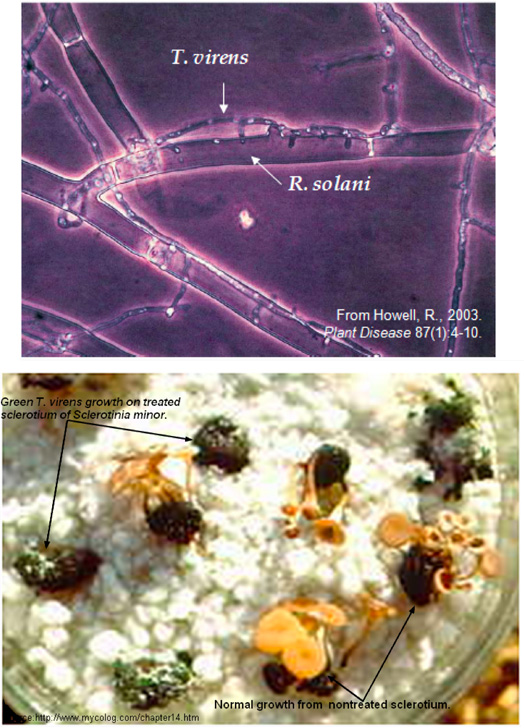 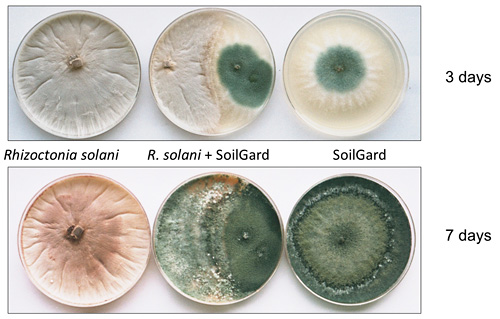 Figure 2: Pure cultures of Rhizoctonia solani (left) and Gliocladium virens strain GL-21 (right). After 3 days the two fungal cultures are growing normally and have met in a typical inhibition zone (top-center). The sporulating GL-21 culture shows its typical deep green color (virens is Latin for “green”). By day 7, the GL-21 culture has overgrown the R. solani culture and has started to sporulate, as indicated by the splotchy green coloration over the R. solani portion of the dish (bottom-center). 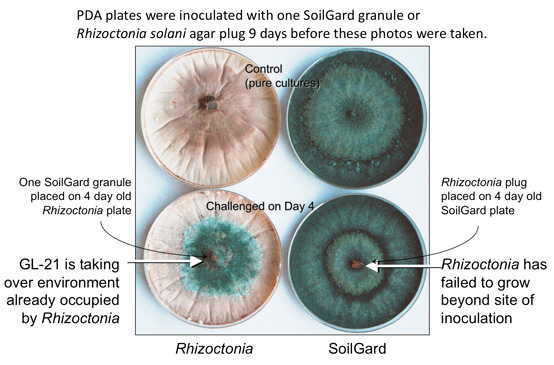 SoilGard® 12G was tested under field conditions in Greenfield, CA during 2009 in cooperation with Steffi-Saul Ketzler: BioResearch Inc. The trial was set up as a randomized complete block design with 4 replicate plots/treatment each 2 rows x 6m.

SoilGard® 12G was applied at 4lb/a a total of three times: 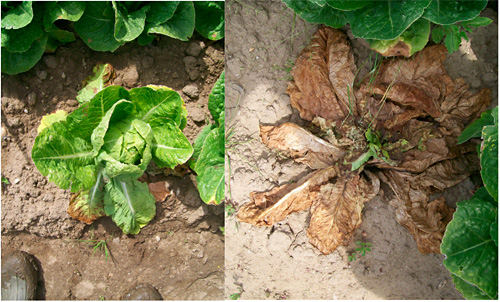 At the conclusion of the study, when the season long total of the diseased plants were calculated and the percent control of each product was determined (fig. 5), significant differences between treatments became apparent. The best performer was the Certis Experimental product 9090 at 4 lb/a, which exhibited excellent control at 83%. This was followed by, SoilGard® 12G at 4 lb/a, and the Certis Experimental product 9090 at 1 lb/a, with 67, 65 and 61% control, respectively (fig. 6). Contans showed control of only 51%.